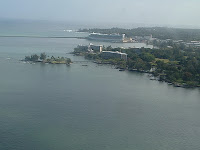 My first back-to-back Ultra and Marathon experience started in the quaint, lush, ‘Old Hawaiian’ town of Hilo on the Big Island. Steve accompanied me for the ultra marathon to be my support crew as no refreshment stations are provided during this race and he is the best support person you could imagine! After landing in Hilo and checking in at the Hilo Hawaiian Hotel adjacent to Coconut Island (the start) on Banyan Drive we headed off to the Volcanoes National Park in the hopes of seeing some eruption activity. Once in the park we were blanketed by a thick haze of vog (volcanic smog) and could feel the sulphur dioxide in the air as our eyes and noses started to burn. Along Crater Rim drive we saw multiple steam vents and as we neared Kilauea Caldera and the Halema’uma’u crater thick SO2 filled smoke was billowing out of the crater in huge volumes and due to the ‘Kona wind’ conditions the area was rendered inaccessible due to these high levels of vog .We were evacuated out of this section of the park by Rangers wearing gas masks.

Once further south the air quality improved and we were able to view Kilauea Iki crater from different vantage points. This is a collapse crater formed during the 1959 massive volcanic eruption which occurred after an earthquake and the crater filled with red hot, swirling MAGMA (Dr Evil accent). There is a mile out-and-back walking trail which we strolled along called the Trail of Devastation - aptly named due to the devastating effects of the cinder outfall of the 1959 eruption which wiped out all the vegetation in this areaT 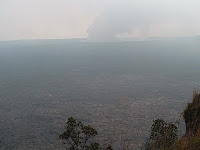 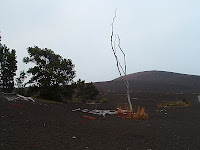 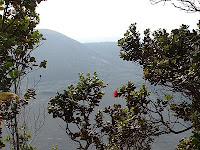 Walking along the Trail of Devastation 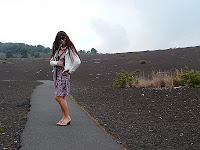 Race day: 31 ultra runners and a few relay teams lined up for the start at Coconut Island next to the Queen Liliokalani Gardens in the darkness of early morning (6 a.m.) The weather was much drier than last year and the predawn section of the run was done in perfect temperature. The race starts at sea level and climbs steadily to 4000ft along Highway 11 through the business section of Hilo, through Kurtistown and Mountain View and onwards and upwards towards the town of Volcano at the entrance to Volcanoes National Park. I had forgotten how steep the route was and prior to the race I told myself that it wouldn’t be as difficult as Run to the Sun, which is true, but it’s still uphill all the way with many difficult sections especially around mile 22-23 when the weather was extremely hot and voggy. I recognized familiar faces from last year’s event and those of the ‘crazy’ but wonderful community of ultra runners in Hawaii. One of the reasons that I love this race is because it’s small and intimate and I finished wanting to return again next year. My time was 6:02 which was an improvement of 7 minutes from last year. Steve and I had to dash to the airport to catch a flight back to Honolulu and I was going on to Maui for the next race in the morning. A hui ho Big Island , we’ll be back again to experience more of your spirit of aloha!
The long road from Hilo to Volcano 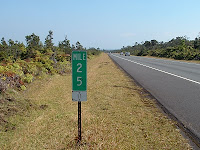 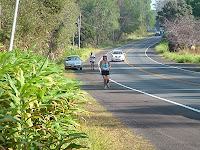 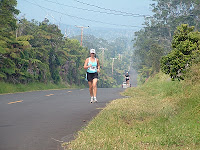 Maui : I stayed in Kihei at the Maui Banyan and had a delightful reunion with Tamarin and R.J who have recently relocated to Maui. The marathon started at 05:30 in Wailea and followed the ocean road all the way to Lahaina on the leeward side of the island. I ran with Mnt Haleakala ever present at my back, the monstrous dormant volcano constantly beckoning me to it’s challenge again…the start of the race was very ceremonial with conch shell blowing and Hawaiian chanting and then all the runners were taught an Hawaiian chant to the tune of Shosholoza which was really fun for me. The course was flat with a middle hilly section and flat again, so not too bad for someone who had just done an uphill ultra the day before. During the dark hour of predawn through Kihei I heard the constant gentle lapping of the ocean to my left and as dawn broke and I turned my head towards the sea, I saw my first whale of the day. The section of ocean between Maui, Lanai and Molokai is a sanctuary for Humpback Whales who come to Hawaii from Alaska during winter to give birth and have some fun in warmer waters. Throughout the 26 miles/42km almost every time I looked seaward, I saw some kind of whale activity. It became hotter and hotter and the last six miles were definitely a mental process of telling the body to place one foot in front of the other whilst still running and I made it across the finish line in Lahaina in 4:48 (not very fast but I‘m satisfied with my time due to the accumulative distance traveled this weekend).I highly recommend this marathon for it’s beauty, great aide stations and friendly vibe!!
Back on Oahu I’ve now qualified as a 4 Star Marathon Maniac which is a group you can belong to if you’re insane enough to run a lot and you have to qualify by meeting certain criteria e.g running back-to back marathons. I’ll be starting my training for my next ultra in march.
A hui ho
Aloha Heather