Wonderful "talk story" today at Kapolei Library. The audience was engaged and people left the event with books in their hands saying that they were feeling inspired to pursue their own dreams! Doesn't get much better than that! I had a similar response to my talk at the Kahuku public library a couple of weeks ago and really want to send out a heartfelt thanks to the public library system in Hawaii who host authors and encourage people to embrace the wonderful world of reading. Mahalo nui loa. Unfortunately someone did walk off with one of my books without paying for it after I signed it... I like to live in a world of trust, hopefully it was a mistake. 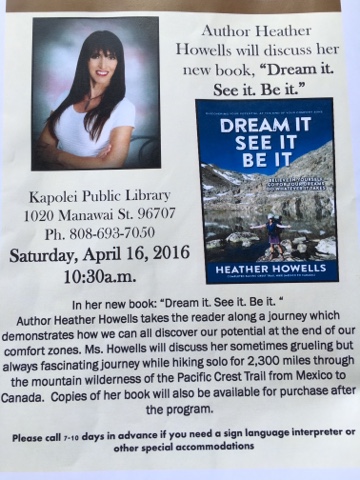 Posted by Heather "Two Feathers" Howells at 6:05 PM No comments:

I cannot wait to embark upon my second ultra distance backpacking adventure, this time along the northern coastline of Spain with my partner Josh. We'll be starting in the French border town of Hendaye, traversing El Camino del Norte along the coastal route of the Basque Country taking in the spectacular views of the Bay of Biscay, continuing along the coastline of Cantabria into Asturias. At the town of Villaviciosa we plan to go inland along El Camino Primitivo, which goes up into the rugged mountains, crossing into Galicia along our journey towards Santiago de Compostela and finally arriving at "the end of the world" at Finisterre on the western coastline.

After hiking the Pacific Crest Trail from Mexico to Canada solo in 2014, I came home to Hawaii, wrote my book "Dream it. See it. Be it. ~ Discovering your potential at the end of your comfort zone." and allowed the brilliant experience to percolate. Then following a very enjoyable 3000km campervan trip in eastern Australia, we decided to embark on a long distance hiking expedition in Europe somewhere. Life pointed us in the direction of Spain and one of the many hiking routes which cross the country. After much research we decided on the northern route, as it was described as being less populated with hikers compared with El Camino de Frances (the most popular route), more rugged and mountainous and the promise of sweeping ocean views along the trail also make it seem quite desirable. I've decided to stick with my trail name of Two Feathers.

Most people that hike any of the Camino routes, have ultralight backpacks and stay in Albergues or pilgrim hostels, which consist of big dormitories filled with bunk beds, bedbugs and sometimes 40 other snoring people. We have read many stories about people rushing to get a bed in a village which would mean you have to get to a hostel early to secure a space thereby significantly cutting into your available hiking time for the day. Considering that we have 30 days to hike approximately 1000km/ 621 miles, we need to cover 33km/ 20 miles per day and can't waste time in this manner. With this in mind, we have decided to hike with a tent and camp. There is minimal information out there about backpacking this route and camping along the way, so hopefully my blog will be helpful to others who wish to do the same in the future. From the minimal information we've been able to gleen, it seems that we'll have to undertake a lot of stealth camping, but as long as we are 2km outside of the town boundaries, this does not seem to be too much of a problem....we'll see. 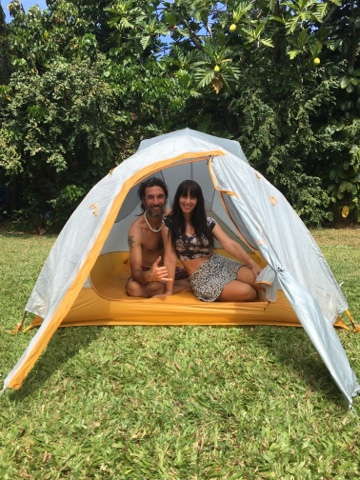 I lived in my Big Agnes Flycreek UL1 for 146 nights along the Pacific Crest Trail and it kept me safe and warm but I was hiking solo and was trying to be ultralight. Now that I have a hiking partner we have opted for a Big Agnes Flycreek UL3 which feels palatial in size and we're looking very forward to setting up our trail home along the journey. A huge thank you to Big Agnes for their sponsorship, it is truly an honor to be an ambassador for such a fabulous brand of outdoor adventure gear. I'm sure there may be occasions when we'll opt for a bed in an albergue.

HISTORY OF THE CAMINOS:
These hiking routes have been used since the ninth century as a pilgrimage for Catholics. St James (or Santiago) was martyred and according to Spanish legend his remains were smuggled into Spain and buried in present day Santiago de Compostela. After the Moorish invasion in the 800's and many battles resulting in almost certain defeat, legend describes a vision of St James appearing on a white horse and leading the Asturian army to victory. At it's peak in the middle ages hundreds of thousands of pilgrims are said to have made the journey to Santiago de Compostela to honor the saint.
Nowadays, hikers pursue the journey for many different reasons, including but not limited to pilgrimage, adventure, cultural experiences and personal "walkabouts" or "vision quests".
Everybody gets a Pilgrim Passport, known as a credencial which is a document that you can get stamped as you go through every village and town which turns into a treasured momento. Once you arrive in Compostela the Archbishopic will award you with a completion document called the Compostela, but only if you have met certain distance criteria. This credencial also allows you to make use of albergues.

THE CULTURAL EXPERIENCE:
I've learnt that Spain consists of seventeen autonomous communities, some regions having very distinct cultures, history and their own language. As mentioned El Camino del Norte goes through the Basque Country, Cantabria, Asturias and Galicia.

The hike starts in Irun, the first town in Basque Country which has it's own language (Euskera), flag and identity. I've heard of this region as being a popular surfing destination and have met a few surfers travelling from there to Hawaii. Basque people have a history of seafaring and now boast producing nearly half of Spain's industrial output. Two of the famous towns the trail goes through are San Sebastian (Donostia) and Bilbao, meandering inland and going back to the sea at Pobena.

Cantabria and Asturias are the next regions. There are interesting Paleolithic remains and cave paintings. Moorish wars were fought here between the mountain ranges of the Picos de Europa and the Cordillera Cantabrica. It has steep sections, high humidity and rainfall, all set between cattle farms, forests, sleepy farming villages and beaches.

The Camino Primitivo branch starts in Asturias and goes up into the mountains taking the hiker into Galicia with it's own language of Galego. Walking conditions become easier and the trail takes you to the big Cathedral of Santiago. From there we hike another 84km/ 52miles to the ocean at Finisterra. 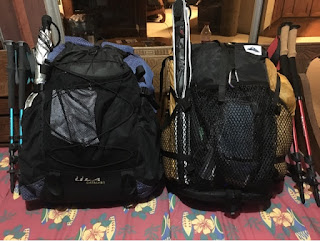 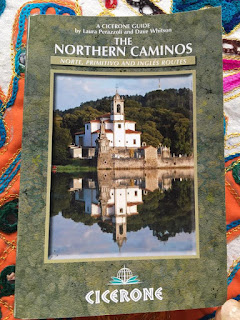 Posted by Heather "Two Feathers" Howells at 12:24 AM 2 comments: