I just discovered that there is a photograph of me slogging it out through the Kalahari Desert on page 6 of this book! Cool....and I've completed 2 of the races mentioned in the book. Now I'm motivated to sign up for the next one!
http://issuu.com/BloomsburyPublishing/docs/theworld_s_toughest_endurancechallenges/7

This is the pic: Posted by Heather "Two Feathers" Howells at 9:38 PM No comments:

One year since my horrible hamstring injury

It's been a year since my awful hamstring tendon injury...a tough and painful year at that!
I'm still in pain, however the severity has diminished and it's the most severe after prolonged periods of sitting, like driving a car for 20 minutes or more as I am placing pressure on the injury and stretching it in this position. I was completely incapacitated the first 3 months following the tear of my hamstring tendon at the ischial tuberosity insertion site, after which I started walking and slow jogging and built up to 2 marathons in April (6 months after the injury). I could feel that the injury was still pretty severe after this and decided to get an MRI to ascertain the severity of the injury. I thought they (the medical professionals) would tell me that I was being a baby and that nothing would show up on the MRI, but instead I discovered that I was not a baby and that I did indeed have a very nasty injury. The orthopedic surgeon/sports medicine doctor I was referred to was absolutely awful. He had zero personality, zero compassion, was completely disinterested in my case and basically just gave me a referral to get an MRI. His nurse was even worse and actually threw the pamphlet for the MRI service at me and told me to make the appointment myself. Neither of them made eye contact with me at all during my consultation and both were obviously very miserable with their own existence. Regardless I had the MRI and the result was as follows:

Basically this means that my left hamstring is completely damaged at the hamstring insertion site into my sitting bone and it has torn away from the bone.

Here is a diagram of what tore off the bone: 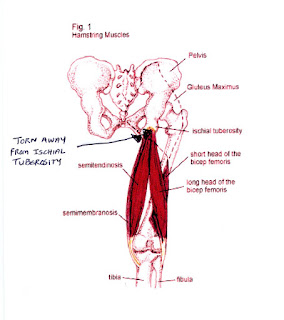 Response from the lovely doctor. "There is nothing you can do for this sort of injury and it does not require surgery. If you want to do physical therapy you can." He then went on to say that he would only refer me to a certain physical therapist in Honolulu itself who I would not be able to make appointments with on a regular basis given that I live 40  miles away and work many hours, making it inconvenient and not sustainable.

So I've been treating myself with a combination of acupuncture, chiropractic sessions, massage, stretching, strength building exercises,fast walking, progressing on to slow jogging combined with cycling. The jogging and cycling I've slowly been increasing in distance and feel that the injury is status quo, maybe improving slightly and feeling slightly inflamed after an exercises session but not significantly worse....and let us not forget Tango! Dancing has kept me sane throughout this long rehabilitation process and I am so thankful for it.

So here's hoping and working towards continued improvement and more adventures in my future!
Posted by Heather "Two Feathers" Howells at 10:58 PM 2 comments: