Maui Moonlight Madness: 170+mile/273.5+km relay around the Island of Maui 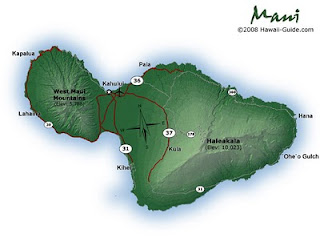 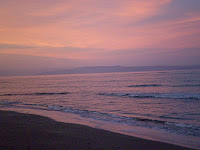 I flew to Maui after a busy 12 hour shift at the hospital after having been awake since 0430 on Thursday morning but that was okay as I was amped and ready to start our epic feat of doing a relay around the island of Maui with 3 other fabulous wahine, Julie T, Jan and Julie D. Stephane was our awesome crew and he and Julie had arrived on Maui earlier that day to hire a spacious SUV and buy supplies like water and gatorade. They met the rest of us at the airport and we drove to a nearby beach park in Kahului to start our run at exactly 11pm. Julie T went first setting the amazing tone for our night running around NW Maui. We each did 10mile/16km legs with our trusty crew driver Stephane always nearby making sure we were safe. My 10 mile leg came third, the moon was incredibly bright despite the clouds and the air was cool and misty with splattering of rain. 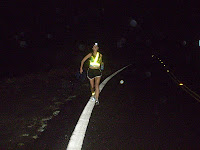 Experiencing the narrow, cliff hugging road all to ourselves up close and personal was exhilarating to say the least. I felt incredibly free, alive and in the moment running along the winding, remote road with plummeting views to the ocean in the moonlight, up and down some serious hills, past sleepy remote settlements and homes interspersed along this road less traveled. Along the way, as I was running an Hawaiian owl (Pueo) flew past me, looked at me and flew off again into the night and I felt that this was a good omen for a protected journey. I had a similar encounter on our Oahu perimeter relay as well as in the early dark hours of dawn when running Peacock Flats (always with Julie T)and in keeping with things Hawaiian, the Pueo is now my aumakua. 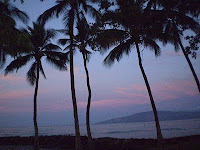 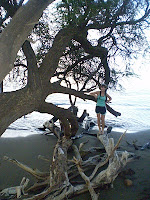 When dawn appeared as a warm pink glow across the ocean on west Maui we ran past beautiful little beaches with views of Molokai and Lanai whilst standup paddlers enjoyed the small kine waves lapping against the shores. Our journey continued along the coastal towns of Kihei and Wailea to Makena beach where we stopped to swim or take photographs and wait for the 2 kane relay team consisting of ultra runners Paul and Jeff who were going to meet us at the end of the road at La Perouse Bay to accompany me along the treacherous lava field portion of the journey on the ancient Hawaiian ’King’s Trail’. This trail stretches along the southern portion of Maui in a hot and barren landscape of loose a’a lava rock as far as the eye can see, with the back slopes of Mnt Haleakala beckoning in the distance. After completing this 5 hour ordeal where with every footfall your shoe rolls over fist size lava rock inducing much discomfort over such an extended period I was left with one blister and a lava rock laceration which isn’t bad considering the terrain. I had my GPS odometer on and can verify that King’s Trail is 14 miles/22.5km long. 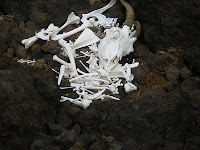 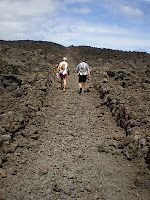 My name for this trail is ‘King’s Trail - trail of Hawaiian Kings, Night Marchers and Menehune and a place where goats come to die’.

This entire stretch was devoid of life but along the way we encountered many, many skeletons whitened by the scorching sun which was a stark contrast against the black lava rock - baby goats, small goats, large male goats - they were all dead! Later we saw large herds of living goats but that was nearer the end of the trail. There were remnants of ancient Hawaiian settlements, ruined black lava rock walls at various points along the trail which generally ran 200 meters away from the ocean and parallel to it. At one stage Paul made contact with ultra runner Mike M who was doing the perimeter of Maui - solo!! He was further ahead and making his way along a deviated track off the lava field up towards the road south side of Haleakala. I found evidence of Mike on the trail in the form of a bright yellow reflective wrist band lying on the blackened lava which I picked up and put into my camelback to give to Mike as a trophy when I next saw him. 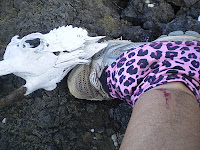 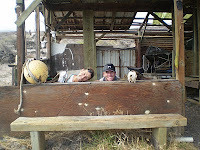 I was told stories of people who had previously done King’s trail as part of an adventure race course and had been on it at night. When they stood still for any given moment they could hear the crunching of the lava rock as the ‘night marchers’ swept along the trail and they thought they were hallucinating when they saw menehunes (similar to leprechauns) sitting on the rocks laughing at them as they struggled along but oddly enough they were both hallucinating the exact same thing…

About 3 hours into our gnarly trail adventure we came across a shack which was obviously used by the ‘goat killer’. The perimeter of this open air dwelling was littered with skulls and skeletons of goats. We took some photos but this place did not have a good vibe - creepy to say the least - and so we did not linger too long, pressing onwards in the still blisteringly hot landscape and ran out of water an hour before the end of the trail. The lower our water supplies got, the more electrolyte tabs we popped in order to retain fluid which worked because my fingers were completely swollen by the time we finished. I had run out of water first because I did not bring an adequate supply with me and at one stage I had a fleeting thought that if I had attempted this trail on my own, I may have ended up alongside the skeletons of the goats. Eventually we traversed the trail leading to the main paved road - and there was Mike M! He shared his water with us which gave me a new surge of energy and instead of waiting for the support vehicle I suddenly had the desire to run and make up a few more miles for my relay team. 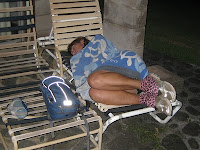 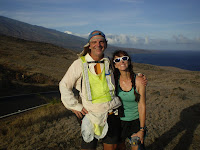 After a very long and exhausting day we stopped to shower and sleep in the beautiful, remote town of Hana on the east side of Maui. The only way you can get to Hana is along a thin, cliff hugging strip of road with 600 bends and 60 bridges, past too many waterfalls to count and plummeting views down to a psychedelic ocean. It is lush, exquisite and verdant on this idyllic part of Maui a.k.a heaven.

As I lay down resting under a huge canopy of leaves on the black sand beach of Hana Bay I really felt a great affinity with the aina (essence of the land) that is Hawaii. Since I started running and going on running and hiking adventures in Hawaii it has connected me in a very special and deep way with the mana (soul) of the islands and I am extremely thankful to be here. 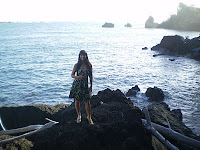 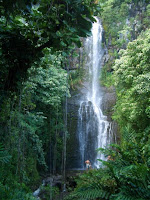 The run from Hana back to Kahului along the Hana Highway was blissful in the late afternoon and evening where we worked out a very energy efficient strategy of each running 1 hour legs thereby staying fresh and keeping up speed. My section of Hana Hwy was spectacular, passing numerous waterfalls and many bridges on a lush, shaded, hilly, winding road where you would reap the rewards of running up the hills by charging down them. We completed our Maui Perimeter Relay at exactly 11pm on Saturday night…48 hours to the second ( I believe we ran for 31 hours). Sunday was a well deserved day of relaxation - lunch at the upcountry Kula Lodge with a breathtaking view across Maui valley to the mountains on the opposite side. Mike M finished his solo perimeter experience at 3am….well done Mike! During the afternoon we lay on a very windy Spreckles Beach while Stephane had a chance to go windsurfing at this world renowned spot. 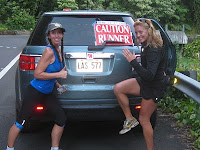 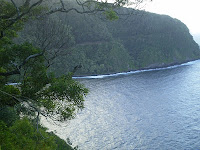 A hui ho Maui. I now feel a great connection with this island and look forward to another return visit. 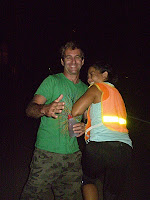 Mahalo nui loa to the Fabulous Foursome relay Team : ‘Kamakazi Cocktail’ - our master organizer; ’ Irish Car Bomb’ - our speed racer; ’Ultra Shishi’ - our Barbie-arian , ’Dirty Martini’ - Pueo friend who can fall asleep at the drop-of-a-hat and French Fry our superb European rally driver. Also to Paul and Jeff for helping me across the lava fields, Mike for his entertaining stories and my family for giving me the blessing to participate in another epic adventure. 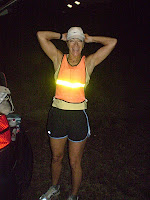 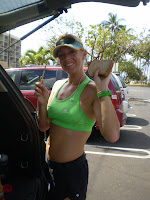 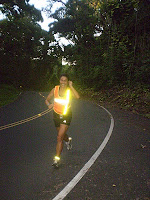 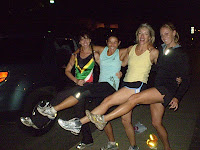 Posted by Heather "Two Feathers" Howells at 12:41 AM No comments: 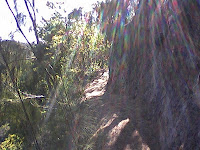 Week 19: (10july2010-17july2010)
I'm deciding to take things a little easier this week to allow my body to rest and recover because aside from running I work gruelling 12 hour shifts at a very busy hospital and have 2 hours of commuting every day that I work which is exhausting in itself. Back to big mileage next week when I run the Island of Maui Perimeter relay with 3 other ladies....total of 180miles!!
Wednesday: 10miles/16km - hills
Thursday: 21miles/33.8km hills and trails
Posted by Heather "Two Feathers" Howells at 5:12 PM 1 comment: