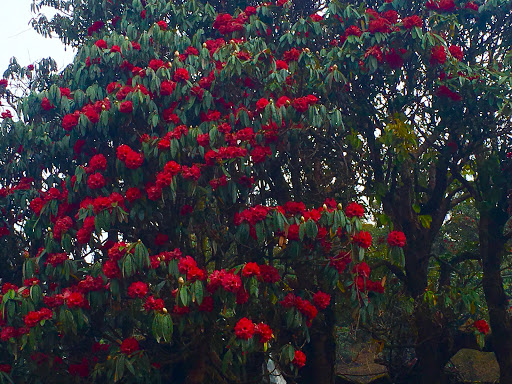 Shikha to Ghorepani: Hail and rain in a Rhododendron forest 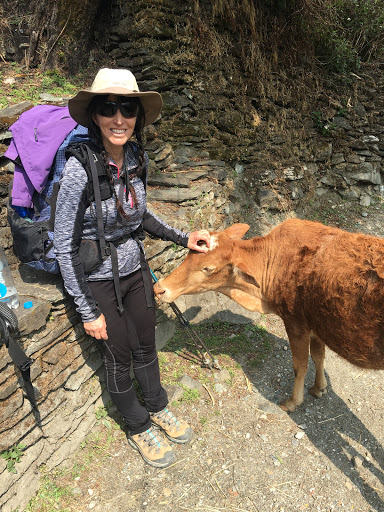 Saying goodbye to our hosts and Patrick from Plymouth, who has been very helpful to us, we started our rock stair climbing through the most spectacular Oak and red and pink blooming Rhododendron forests imaginable. It rained and even hailed with reverberating thunderclaps all the way up and we finally got good use out of the trekking umbrellas which we’ve been carrying all this time. 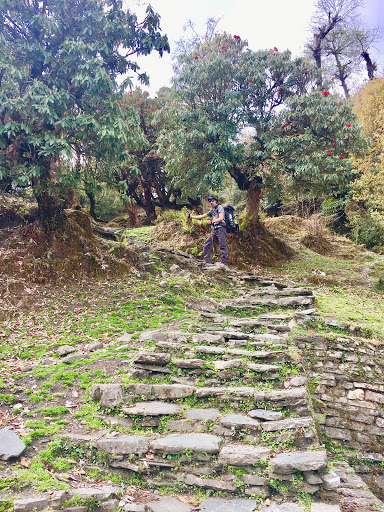 We had wonderful, friendly encounters with the local people we met along the way today, from porters of other hikers, to school children who spoke very good English. One man we spoke to told Dreadknot that he looks like a scientist... we laughed.... it must be the bushy silver beard! 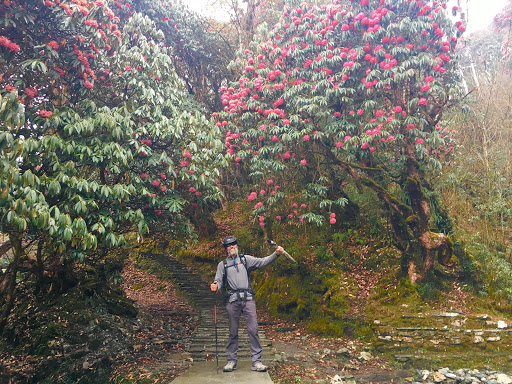 At the halfway point of our stairmaster extraordinaire exercise today we stopped off in Chitre for a lunch of vegetable fried rice, apple pie and ginger tea. On a funny note, Dreadknot has always hated ginger and now he is the first to order ginger tea! 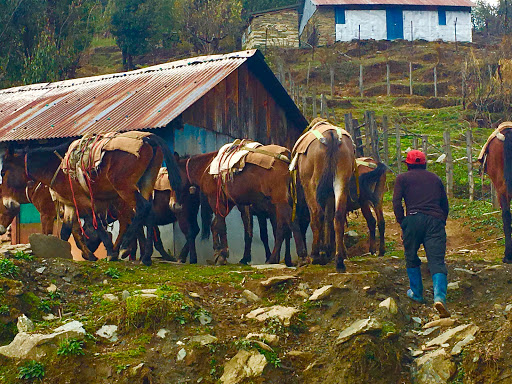 Reaching Ghorepani was akin to reaching nirvana, we were so exhausted from all the climbing.....925m/ 3034ft of elevation gain today! That on top of an 744m/2440 ft climb yesterday was killer! 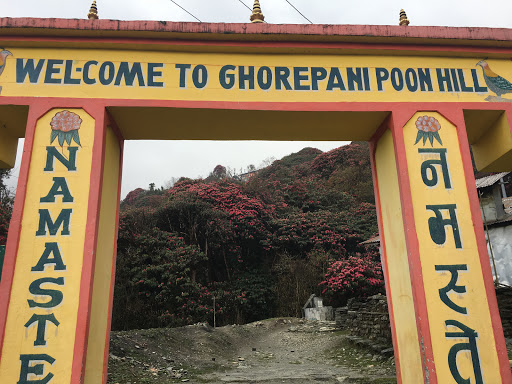 Once again, as if on cue, the heavens opened up and unleashed a heavy rainstorm just as we found a room. We were turned away from 2 hotels as they were fully booked at first. It is pouring out there and there is an electrical power outage here on top of this mountain. Ghorepani is an extremely busy trekking town, with multiple lodges and hotels. Trekkers arrive here from every direction to do various hikes that are available from here, the biggest draw card being Poon Hill, which when clear gives epic views of the Annapurna Range. 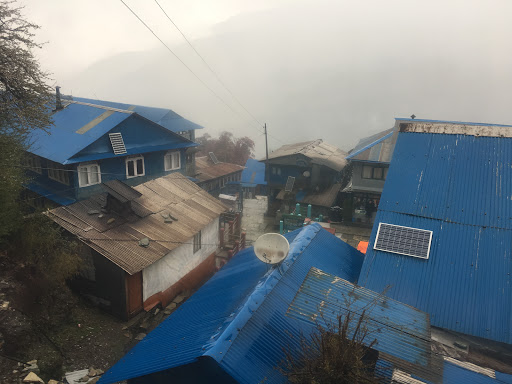 The Annapurna Circuit forks into two potential trails to end the Circuit. We are choosing the original longer route through Todopani, Ghandruk, the Australian Camp down to Lumle where it officially ends. Depending on how fast we are able to hike , this will take another 2-3 days, after which we plan to spend a couple of days in Pokhara before returning to Kathmandu.

It’ll be early to bed tonight, snuggled up in our cosy sleeping bags with duvets on top! 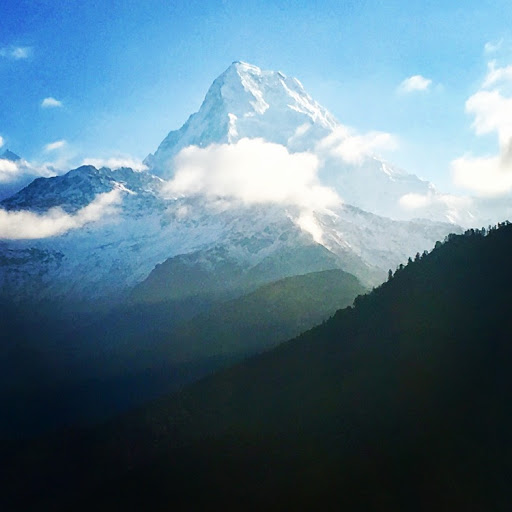 The magnificent sight of the peak of Annapurna South welcomed us into the day. The rains had stopped, the sky was partly blue, still with evidence of a threat of more rain to come. 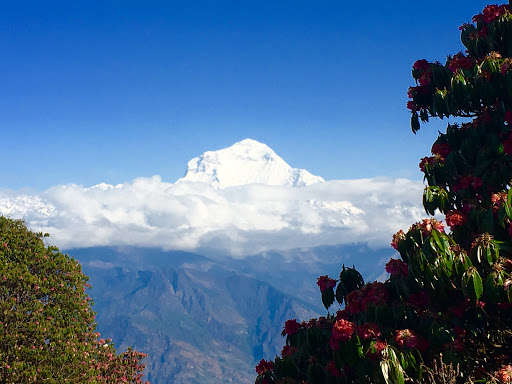 More climbing was the order of the morning out of Ghorepani on the challenging Ghandruk Trail, part of the original Annapurna Circuit. We did not go to the Poon Hill lookout at 04:00 am, as we got the same vistas from this trail at a vantage point high above the town. We could enjoy the peak of Dhaulagiri and Annapurna South from the Deurali Pass lookout. 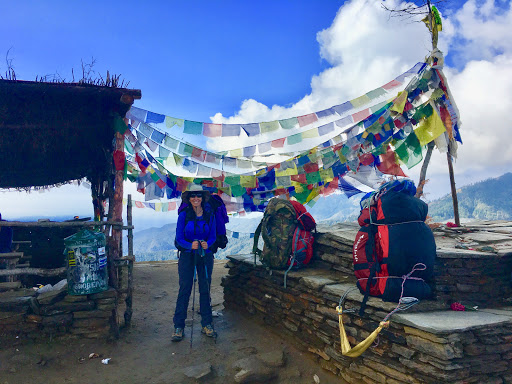 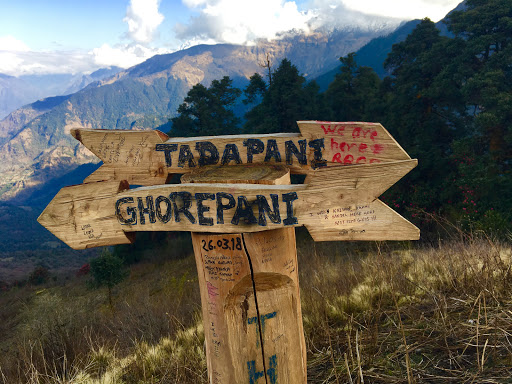 We climbed back up to 10,600ft/3231m and then endured a punishing downhill on uneven rock stairs, dropping 2000ft/610m in elevation just to have to climb back up another 1000ft /305m before we could enjoy lunch at Tadapani in the mountain top. 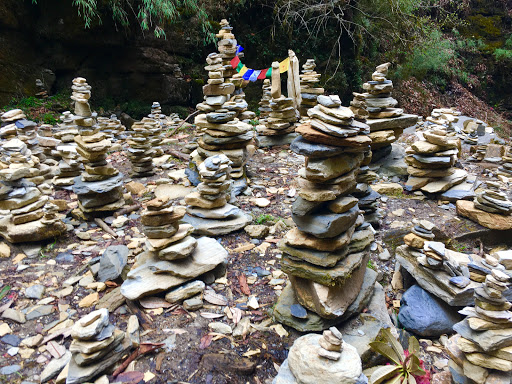 By the time we reached our destination of Ghandruk, (Nepal’s second largest Gurung community), we were ready to call it a day. The entire afternoon was spent plummeting downhill through a vast Rhododendron forest alongside a stream. Our knees and the bottoms of our big toes were feeling the pressure. 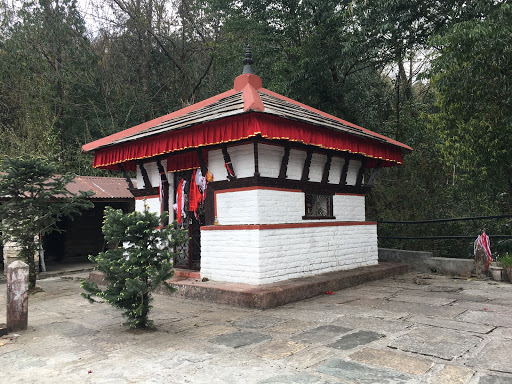 We walked past a sticker on a pole which read, “ Auditions are being held for you to be yourself. Apply within.” 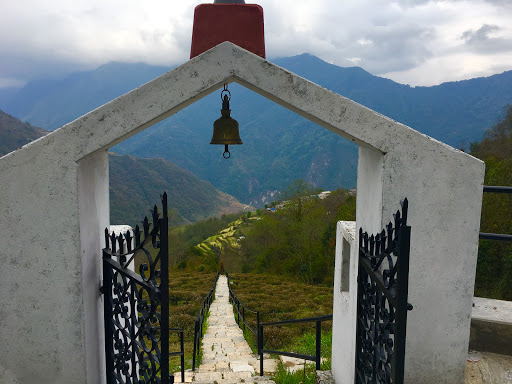 Ghandruk is a beautiful town. The views of the Annapurna range include : Annapaurna South, Himchuli, Gangapurna and Macchapucchre(Fishtail). The clouds parted after 6pm to reveal these majestic peaks to us. We are in awe and feel so fortunate! 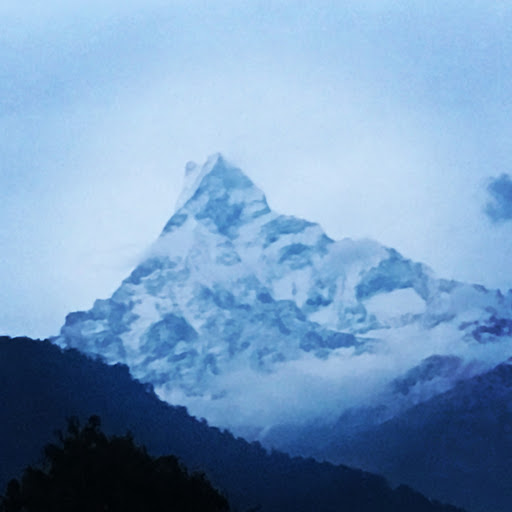 There is a temple at the start of the town with beautiful views and 670 steps leading up to it from the village, which we walked down. The old part of the village is extremely picturesque, all the buildings built from stone, with slate roofs and neat gardens. We passed by the Ghandruk Cultural Museum and Lama Heritage Resort. 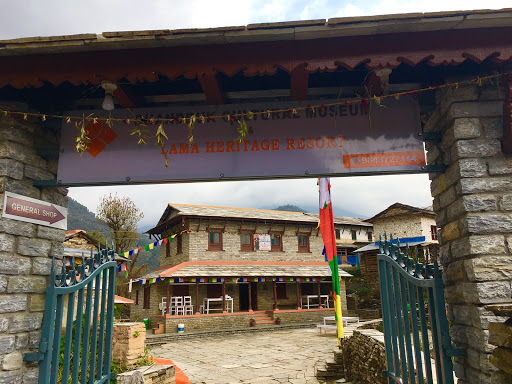 Relaxing in the dining hall of The Hungry Eye after a hard day of hiking and a freezing cold shower we enjoyed the company of fellow trekkers and were told the unsettling information about a series of recent murders on the trail, it sounded like solo trekkers in particular were being targeted.

After numerous cups of ginger lemon honey tea and Dal Bhat we settled in early to be energized for our last couple of days on the spectacular Annapurna Circuit. 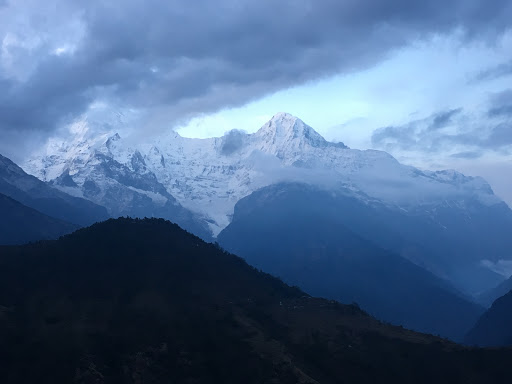 After a knee breaking descent down the mountainside from Ghandruk following a sleepless night due to a chorus of barking dogs, we were faced with the awful reality of climbing up the mountain on the other side to Landruk. To be honest, I was not a happy camper and inched my way up another thousand plus rock stairs. I started feeling a little better after I fished around in my backpack and found a roll of sports chews with electrolytes and glucose in them. 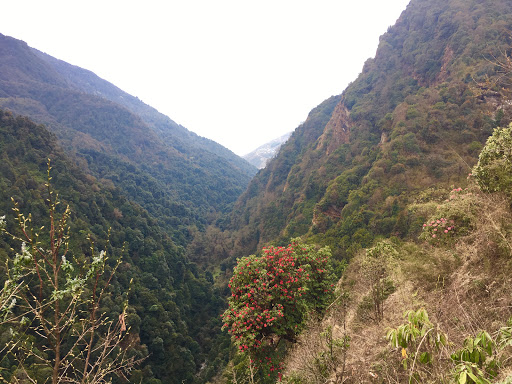 We stopped in at the Moonlight Guesthouse and Restaurant in Landruk for a bowl of veg noodle soup to give us some more energy to keep going. The owners proudly exhibited the volleyball championship medals earned by their son on the walls. We noticed that the local school high up on these terraced slopes had a good volleyball court in the grounds.

Lesson from the trail: Many small steps make big progress. Just when you think you can’t carry on anymore or you feel that you can’t reach your goal.... just continue moving forward, “ Slowly, slowly” as the local Nepalese tell us and eventually you will get there.

After Landruk, we walked through Tolke still high up in the mountains and then trudged through a few more small villages. We have used our map app map.me often to check whether we’re on the correct trail or not and have even had to backtrack and make a correction. 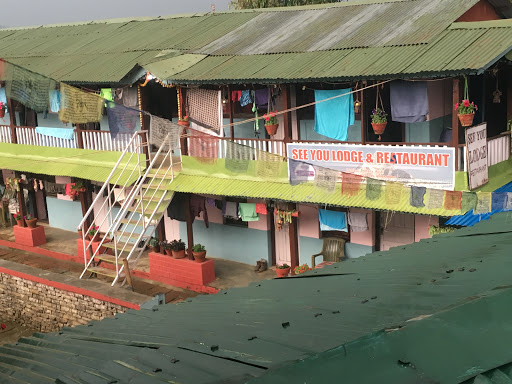 I had the feeling of being saved when we arrived at Pothana, a haven up in the pine forests, just as the rain started coming down heavily. Our trekking umbrellas have come in very useful during this last section of the hike. We even got to have a hot shower!

Tomorrow is our last day on the Annapurna Circuit. We have chosen to walk every step of this epic hike on the original route, starting in Besisahar and ending in Lumle, near Pokhara. It’s been tough and not many people hike it from start to finish. This last section in particular has been emotionally and physically taxing as we have been going straight up and down mountains multiple times on a daily basis. Tomorrow we go through Australia Camp and then on to Lumle where we finish and will spend a couple of days in Pokhara to decompress. 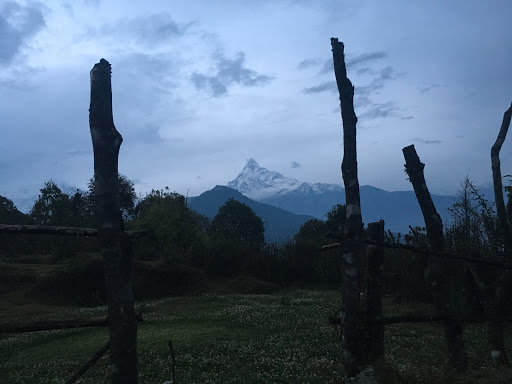 Tonight we are cosy and safe at “ See You Guest House & Restaurant “.

We’ll check in again at the end of our quest tomorrow. 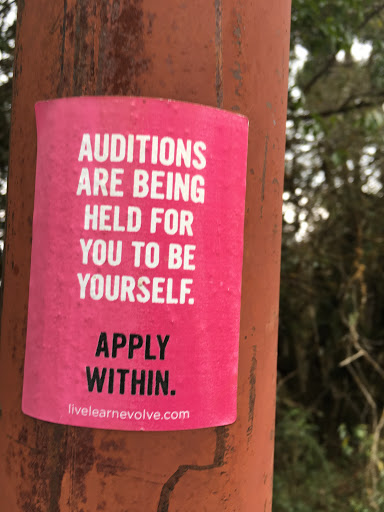 Posted by Heather "Two Feathers" Howells at 6:06 AM