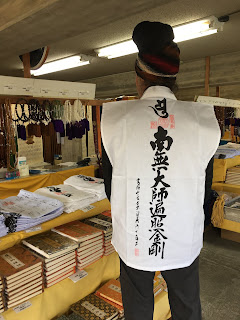 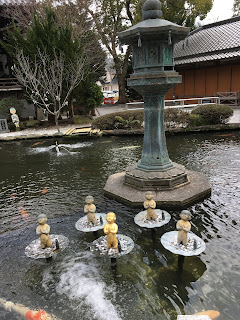 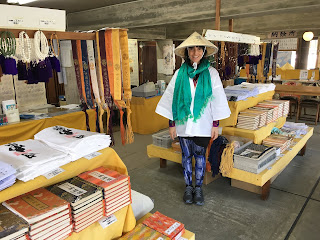 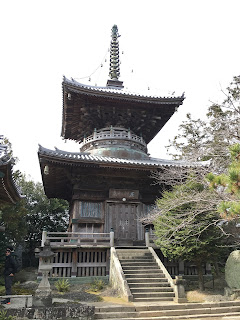 It’s a lovely thing to wake up on a chilly morning and be able to sit on a warm toilet seat. Japanese toilets rock!
Breakfast at our hotel was bright and early, tasty and nutritious and the hotel took us back to the airport on a complementary shuttle bus. From there we took a three hour bus drive to Tokushima train station on the island of Shikoku, followed by a 30 minute train ride to Bando station in Naruto city. Finally after a 10 minute walk from there we arrived at Temple 1 (Ryozenji) named after a sacred mountain in India where Buddha gave sermons. It is here that we each bought a pilgrim top, I bought the conical straw hat, incense, name slips which we will give to people who offer us ossetai (gifts of kindness) along the way. One can also write your name, address, date and a wish on a slip and place it in special box at the daishi hall. Josh bought a beautiful scroll to collect his Temple stamps on and I bought a stamp book ( nokyocho ). Whew... now we felt we had all the necessary requirements to start the journey and it was already 2:00pm in the afternoon.
Temple 2 (Gokurakuji) is a 1.1km walk from the first temple, which takes you on foot through a quaint residential neighborhood.
In the grounds is a large cedar tree which is said to give one a longer life and people come to this temple to pray for an easy childbirth.

Temple 3 (Konsenji) is 2.1km from number 2. If you can see your face’s reflection in the gold well (konsen) apparently you will live to 92 years of age, if not, you will die in 3 days. We did not look into the well, so it’s anybody’s guess how long we’ll live for. 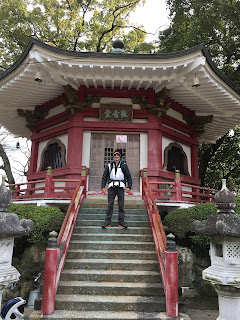 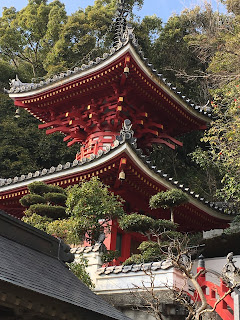 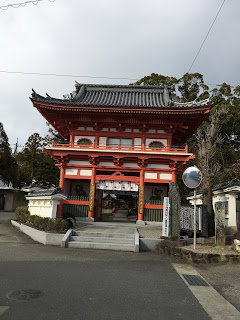 By now it was getting late and we had heard that the temples close very punctually at 5pm. We hot- hoofed it along a muddy trail and then along a rural road another 4.9km and made it to Temple 4 (Dainichiji) just as it was closing. The lady at the stamp office graciously stayed open to give us our stamps (nokyo). The monk Kukai is said to have founded this temple which has a long history of disuse and reconstruction but is very much in use today.