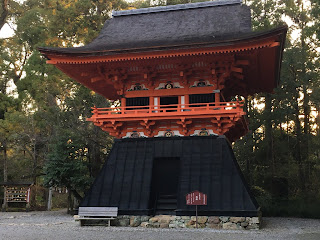 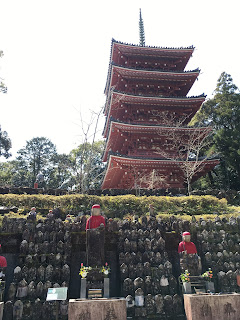 My left heel is very bruised from impact injury. I’ve got newer more cushioned insoles, taking anti-inflammatories and taped up the heel per a video we saw on YouTube. I’m going to use my trekking poles like walking sticks and put more weight into my hands on the poles. Lesson learned: when doing long asphalt hikes with a heavy load, you need very cushioned insoles. The Saucony insoles that came with my trail running shoes have been compressed into nothing and are now paper thin.

It is impossible to camp in many of the city walking sections and a hotel or minshuku (B&B) is sometimes our only option.
This section consists of paved road walking for many, many kilometers through one village and town after the next. Although the sun is out, the air is crisp and we can see thick snow on the mountain tops in the distance.
Temple 28 (Dainichiji) is a place where it is believed that illnesses above the neck can be cured. The trail tried to spit me out at this point. The heel pain was taking over my brain and telling me I couldn’t go on.... “but I said no, no,no”, with the help of OTC pain relievers and a very caring and compassionate hiking partner who took some of the heavy water load on his back.
Temple 29 (Kokubunji) is a place where legend has it that if you pray to the same number of stars as your age, you will ward off misfortune and bring about good fortune to your life.
Slow and steady gets you there and as long as I keep moving slowly I can keep going. The minute I stop, the restart on my foot is agonizing.
Temple 30 (Zenrakuji) This Temple historically fell into disuse when Shintoism and Buddhism separated. Only in 1875 ( after a 7 year spree of burning all Buddhist artifacts) were the people of Japan granted permission to practice whatever religion they wanted to. After discussion this place became Temple 30 in 1929. We obtained permission to have sanctuary on the grounds for the night and are extremely grateful for this ossetai.
Five o’clock in the morning is when we get up, before the monks and caretakers, out of respect so that they don’t have to deal with us packing up our camp. While we waited for the noukyosho office to open at 7am, we went across the road to look at the Shinto temple and grounds.
Kochi City is a sprawling city that seems to go on forever. We walked the highways, byways and village lanes, through a gorgeous botanical garden to magestic Temple 31 (Chikurinji) with its five storey pagoda (built in 1980) It’s original 3 storey pagoda was blown down by a typhoon in 1899.
From there it was much the same to Temple 32 (Zenjibuji) up on a hillock where we met Sakio from Tokyo. He has also walked the Camino Santiago de Compostela in Spain. This temple has become known to pray for the safety of sailors and fishermen and has magnificent views of Tosa Bay.
To get to Temple 33 (Zekkeiji) you have to cross a wide river via a free ferry. We arrived at 33 just before closing time and I asked the lady at the noukyosho office whether there was any tsuyado (free temple accommodation) and she said yes... so tonight we are staying in a lovely little enclosed cottage room in which we can sleep in our sleeping bags on our inflatable sleeping mats. Yay to another day on the Shikoku Henro. 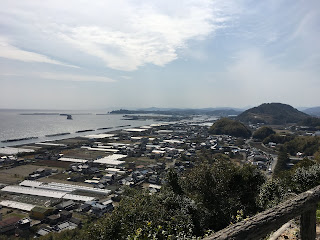 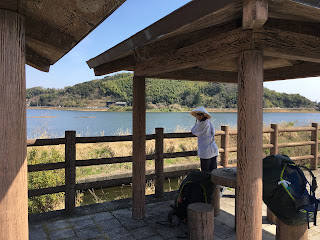 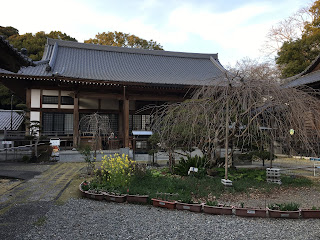 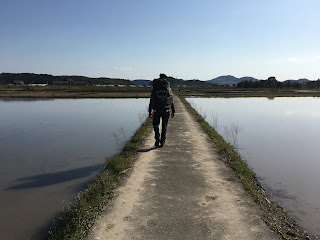